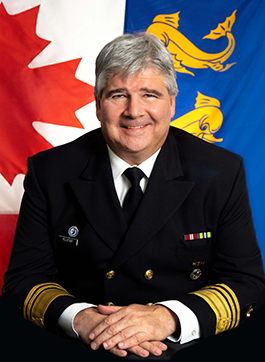 As Chief Executive Officer of the Canadian Coast Guard (CCG), the Commissioner ensures that the CCG delivers its programs and meets its operational performance targets by:

The Commissioner is responsible for reporting and explaining CCG expenditures to ministers, parliamentary committees and the public.

He started his career as an engineer officer in the Quebec Region. In 1998, he joined headquarters, where he held positions with increasing responsibilities. In 2011, Mr. Pelletier was appointed Director General, Fleet. He held that position until the new organizational structure of the Canadian Coast Guard took effect on October 1, 2012 when he became the Assistant Commissioner of the Central and Arctic Region.

On June 1, 2015, Mr. Pelletier was appointed the Deputy Commissioner of Operations. He received a Commissioner’s Commendation in recognition of his strong leadership, commitment and the high level of expertise and professionalism.

Mr. Pelletier was appointed Commissioner of the Canadian Coast Guard on December 9, 2019 and came to this role with vast experience and a well-established reputation for meeting challenges and obtaining desired results.

Mr. Pelletier’s top priorities for the Coast Guard are modernization of its services to Canadians as well as the renewal of the fleet. Coast Guard workforce remains a top priority with a focus on workforce diversity through recruitment, retention and career development as well as the overall employees’ wellness. While having the best equipment, you need the right people to be successful as an organization.